Ever since I heard it described as “one of the most underrated capitals in Europe”, I’ve been really eager to visit Berne. So because I arrived in Switzerland three days before my mate Richard, I saw it as the perfect opportunity to leave French speaking Lausanne and head to the German speaking capital region. Whatever I had expected the city to be like was entirely surpassed by the reality. Berne, simply put, is one of the most exquisitely beautiful cities I’ve ever seen.

Just like the Polish girl I chased in school, Berne is stunning, classy and easy to fall in love with. Cobbled streets, timber clad houses, church spires and stone bridges, an azure blue river, a magnificent cathedral and parliament building… there is no end to the list of aesthetically pleasing features prominent in this place. It also feels like everyone here is well to do, erudite and sophisticated. Unfortunately, just like that girl, Berne knows it’s pretty. And if you want to impress her, you’re gonna have to pay. 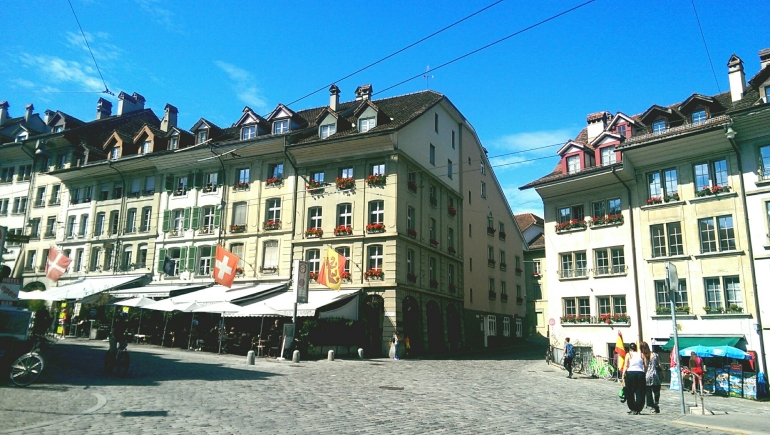 Of course we all know that Switzerland is expensive. Upon occasion, I have been described as thrifty (miserly) and someone who lives frugally (like a beggar) so in retrospect visiting here was probably not the wisest decision. In fact the cost of a sandwich from the supermarket is enough to make me weep. I managed to find a couchsurfing host thankfully, which meant crashing on a hardwood floor and having two abysmal nights sleep, each morning waking up with my back in agony (completely worth it to save 80 francs on the hostel!). So obviously I was keen to explore the city whilst spending as little as possible. And for the two days I was there, I managed it. 😀

Berne on a budget

When eating out costs at least £20, a pint of beer is pushing £6 and even using the toilet costs £1.50, you can’t blame me for cutting down to the absolute bare essentials. I ate out of supermarkets, leapt on anything half price and kept a mile away from any culinary or alcholic temptations. But I’ll stop complaining and tell you how I spent my time.

Firstly I downloaded a walking tour online while using the free WiFi in the station. As it turns out, you can enjoy pretty much everything Berne has to offer by walking around it in about an hour. But I was here for two days so I was in no rush. The walk took me down the central street of the old town (there are only 3) past the old jail and the clock tower, which apparently at noon each day does various adorable things. But alas I missed them. It took me through the covered shopping arcades and past various fountains; one in particular grabs your attention; the Kindlifresserbrunnen, which is topped by an ogre eating children. Classic European landmark…

Crossing the Nydeggbrücke over the River Aares provides magical views to the winding, sloped streets below and back towards the church spires and rooftops of the old town. To the right of the bridge is the bear garden, where the mascots of the city roam inside their enclosure; three real live bears! 😀 The ethics of keeping bears there is apparently quite an issue for the Swiss, but for now they’re staying. The river is a stunning colour of aqua blue and rushes past with such power, I worried for the people swimming in it! They went under the bridges and out of sight within seconds. It’s (relatively) safe, don’t worry, I didn’t just watch people drowning! But definitely not something I was tempted to participate in…

Backtracking across the bridge and taking the left road took me up the cobbled streets towards the münster (cathedral), which of course was covered with scaffolding as per my luck. The park behind it had great views, but I dragged myself off to see the Parliament Square and the park behind there too! So many great views, and so many great buildings!

But that was kind of it. After my nights out in Madrid I really fancied a few days detox. Taking it easy you know. I’m often guilty of cramming in as much as I can to my visits to places, so I thought I’d refrain from walking until my feet hurt and my neck was sunburnt, and just stroll the promenades between parks, finishing my book; “The hundred-year-old man who climbed out his window and disappeared”. I climbed to various vantage points round the city, bought my lunch from the supermarket and just made the most of the views. Not very exciting, but I would recommend you do the same if you get the chance!