Visiting Hong Kong has been on my to do list since October 2011, when I met a young lady named Haoqing in my university halls. She harangued me about not having been to her home country all through our friendship – never “making the effort” to visit her in the summer holidays and so on. Well my usual excuse for not making the trip was because Hong Kong is freaking a million miles away and I could hardly afford to go. That excuse wasn’t gonna cut it though on this Asia trip. I was going to be in Hanoi and the flight from there to Hong Kong was cheap as chips. So Jake and I added 5 days in the city on our itinerary.

Thinking back four months to when we arrived in Hong Kong, there are a few things that come to mind. I remember that it rained and that the locals were astonishingly rude. I’ll never forget the view across Victoria Harbour, as well as the teeny room we stayed in on the 14th floor of a huge skyscraper. Also Jake and I kinda had a big fight for one or two of the days.

Actually, now that I’m writing about it, a lot more things are surfacing in my memory. There was the Michelin star restaurant we dined in one evening (famous for its pork dumplings), the dodgy as hell Chung King Mansions I thought would be interesting to see but just turned out to be terrifying and of course a celebrity cat named Cream.

Hong Kong is unlike any city on Earth. It’s kind of like New York mixed with Singapore with a distinctly British flavour. Kind of? The skyscrapers and ensuing cityscapes are unreal, making for incredible views across the harbour as well as from Victoria Peak (we caught the tram up). We were staying in Kowloon (which is pretty central) and had a good time exploring the city’s parks, shopping districts and harbourside walks. The rest of Southeast Asia had been a bit touch and go civilisation-wise, so we were very happy just meandering around a proper city again. We savoured not being struck down by speeding mopeds, dodging heaps of trash in the streets and sweating through oppressive heat (still hot though).

We checked out several different areas of the city. Soho was the weird western microcosm where there were more white expats than locals. The markets in Mong Kok sold every piece of tat you could ever desire, as well as many ethically dubious items like live animals and fish sold in plastic bags. Tsim Sha Tsui made us feel like wealthy corporates and we enjoyed the incredible views from the shore of Hong Kong Island. We explored the Aviary in Hong Kong Park, stared agog at three (what we assumed to be) chinese pop stars in a shopping mall singing about sugar free something-or-other, visited the serene Chi-Lin Nunnery and also had an educational time at the Science Museum. In retrospect we achieved a lot… 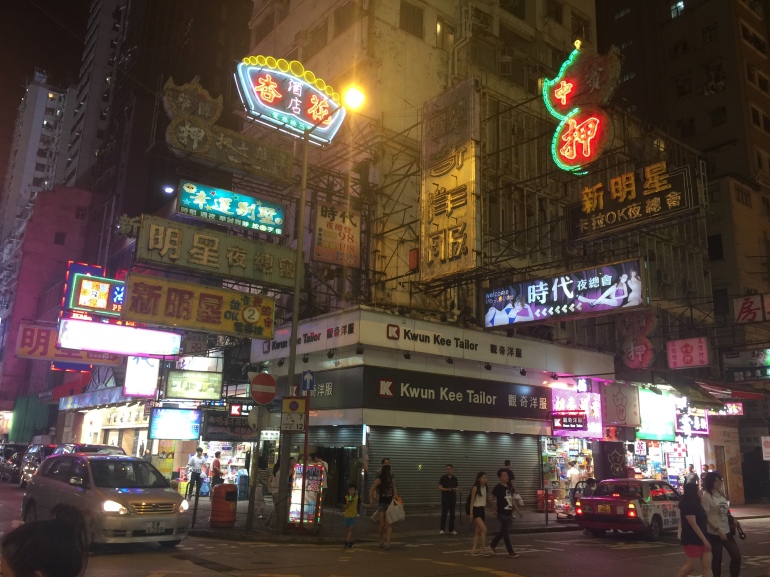 One of the best things about our stay was the food. Unfortunately my friend Chu wasn’t in the city at the time, but she did manage to send me through some recommendations of some of the best restaurants in the city, so we spent one tiring day trailing round the city trying them all. We had Wonton Noodles and some kind of dessert burger things… what else I cannot remember.

Hong Kong was a cool city, definitely worth a visit. It was great to see where my friend was from (even if I didn’t see her exact hometown, the remote fishing village of Sai Kung) and learn more about the culture of this unique little country. However Jake and I weren’t devastated to leave, because our next destination was one we’d been looking forward to for literally our entire lives!